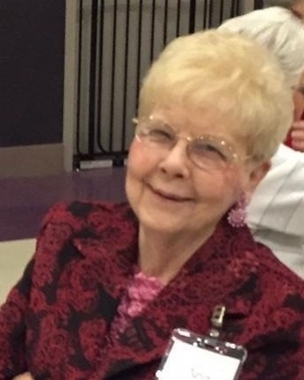 Back to Annie Mae's story

Annie Mae Jones, 85, of Duncan, Oklahoma passed away peacefully at her home in Duncan, Oklahoma on Monday, December 30, 2019. Funeral services will be held at First Christian Church in Duncan on Monday, January 6, 2020 at 2:00 PM with Rev. Arnold Nelson Jr. officiating. Interment will follow at Duncan Cemetery under the care of Don Grantham Funeral Home. The family will receive friends Sunday evening from 4:00 PM to 6:00 PM at the funeral home.
Annie Mae Jones was born on March 21, 1934 in Hunter, Oklahoma to James "Jim" Peck and Mabel Marie (Grants) Peck. Annie was a graduate of Hunter High School. She married Hunter Howard Kitchen Sr. in 1948 and were happily married for 23 years before Rev. Howard Kitchen passed away on Aug 7, 1971. Annie married Dr. Robert Earl Wolff on July 23, 1974 in Duncan they were happily married for 20 years before he passed away on February 24, 1994. Annie would marry Samuel Paul Jones on January 21, 2000 in Duncan and were happily married for 10 years before he passed away on May 14, 2011.
Annie worked for over 20 years as an office secretary for Cotton Electric before retiring in 2000.
Annie enjoyed scrapbooking and collecting pictures she was a faithful member of the First Christian Church in Duncan, Oklahoma.
Annie was preceded in death by her husbands, Rev. Howard Kitchen Sr., Dr. Robert Earl Wolff and Samuel Paul Jones; her brothers, Ivan and Lawrence Peck; her sister, Louise Natalie and her parents Jim and Mable (Grantz) Peck.
She is survived by her son, Howard Kitchen Jr and his wife Theresa Kitchen of Hunter, Oklahoma; Stepsons, Mark Jones and his wife Jackie of Edmond, Oklahoma, Dr. Robert Wolff and his wife Diana of Vernon, Texas; step-daughter, Stacy Turnipseed and her husband Lonnie of Mannford, Oklahoma; her sister, Nellie Pratt of Blackwell, Oklahoma; her grandchildren, Elizabeth Mozingo, Katherine Becton, Kyle Kitchen, Brandy Harris, William Wolff, Zachary Wolff, Matt Jones, Andy Jones, Katie Jones, Laura Hendricks, Matt Turnipseed and nine great grandchildren and numerous nieces, nephews, cousins and friends.
Pallbearers will be Kyle Kitchen, Don Powell, Mark Jones, Robert Wolff, Gary Peck, Verlin Pratt, William Wolff, Zachary Wolff and Max Peck.
In lieu of flowers, family has asked that donations be sent to the First Christian Church Building Fund at 912 West Walnut Avenue, Duncan, OK 73533.
Online condolences can be made at www.granthamfuneralhomes.com
Published on January 6, 2020
To send flowers to the family of Annie Mae Jones, please visit Tribute Store.

A place to share condolences and memories.
The guestbook expires on April 05, 2020.