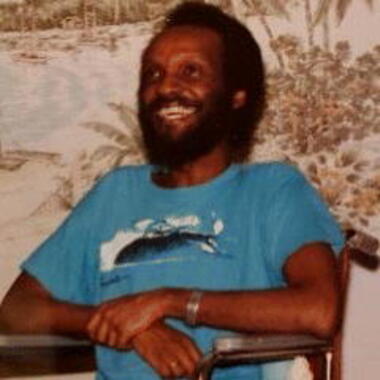 Back to Michael Earl's story

Michael Earl "Dude" Washington, was born March 27, 1954, in Duncan, Oklahoma to Garland Devereaux Washington and Neomi Beatrice Campbell-Washington. He was a firm believer of Jesus Christ and was always willing to teach others about the Lord, as well as his love for the heavenly father. He was also a graduate of Duncan High School. Early on in his life he worked at The Palace Movie theatre as he had a strong passion for watching Sci-Fi, Shark Week, Marvel, and natural disaster movies and many other television shows.
He later joined the Navy where he then became a flight medic until he was honorably discharged in 1979. Michael was extremely supportive of fellow veterans, past and present, as he too proudly served his country. He really loved traveling and always told wonderful stories about all of the places he was able to explore. He was a loving brother and uncle. He was selfless, kind, and very generous. He had a phenomenal smile and never let the circumstances of his disease negatively impact the way he viewed his life. He loved to listen to music. Michael was an all all-around beautiful person who simply just loved life. He never had a bad word to say about anyone. He always greeted everyone with a smile and never met a stranger. He is survived by sisters, Lillie L. Pope (Spouse Lee Pope), Dorothy M. Shorter of San Angelo, Texas. Archie L. Washington of Oklahoma City, and Terry W. Washington (Spouse Selita) of San Angelo, Texas. He also leaves behind a host of nieces, nephews and cousins. Special thanks to his "team, " his caregivers, Wanda F. Beaty, John Newton, Garvin Ford and Deneece Eddington. Michael is preceded in death by his parents Garland and Naomi Washington, sister, Willie Washington, brothers, James, Bobby, and Garland Jr.
Published on January 10, 2020
To send flowers to the family of Michael Earl "Dude" Washington, please visit Tribute Store.

A place to share condolences and memories.
The guestbook expires on April 08, 2020.